I’ve always found New Year’s Eve to be the most anti-climactic of holidays. The big moment approaches, everyone gathers and excitement buzzes around the neighborhood. Then the final ten second countdown, the exclamation of “Happy New Year!” The kisses and fireworks and shouts. By 12:20, it’s all over, but nobody goes home. The moment has come and gone but people can’t let it go. Four a.m. and they’re still trying to hold it, some eternal moment of rebirth, of stasis. It’s a safe room where anything they want to do goes. I’ve seen the same thing on Mardi Gras.

But even knowing that, there’s something thrilling about the feeling of closing something out and starting fresh in those final minutes before the ball drops. Maybe it’s the slow building of tension throughout the day as the shops close up, as the first rounds of firecrackers start to go off, as people start to make their way into the streets in funny hats. By the time the final countdown starts, there’s the feeling of being part of something big. Nevermind that the year already rolled over in Beijing and Paris and Addis Ababa. You count down the moment, the same way as all those people people in all those countries that share your time zone. You’re speaking different languages, you’re thousands of miles apart, but you’re all part of the same moment by choice. There’s something beautiful in that.

In the lead up to the big event, I went walking around Casco Viejo one more time, taking pictures. The sun was setting and the magic hour light highlighted the old city (see above photo). When I got up to the Plaza de Francia, the sun was setting over the Panama Canal. Tonight, shiploads of people will be celebrating the New Year while sailing through the continent. They’ll probably see the same fireworks I’ll be watching from the roof of our hostel. 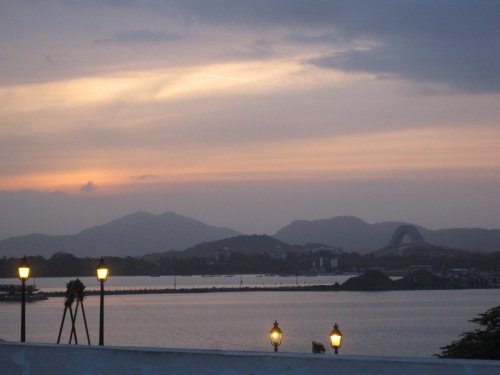 Panama Canal and Bridge of the Americas as seen from Plaza de Francia.

I’ll probably add in a photo of the fireworks later. For now, I’m going to kick back and listen to Elvis and wait for the moment to arrive. Then Corrinne and I will head upstairs and drink a glass of champagne on the roof while the city lights up. If her health is good tomorrow, we’ll take a bus across the Bridge of the Americas and head up to David. I’ll give an update when the time comes.

Happy New Year, everyone. Wishing you good year, and a kind one.

Bootlegger’s Paradise: A Tour of the Hiram...