Here’s what we’re not going to talk about today: Surfing.

Why? Because Nick wiped out in a highly embarrassing fashion, then took two consecutive waves on the head and puked up seawater. That’s why.

Don’t worry. We’ll talk about surfing again in the future, when I don’t look like this: 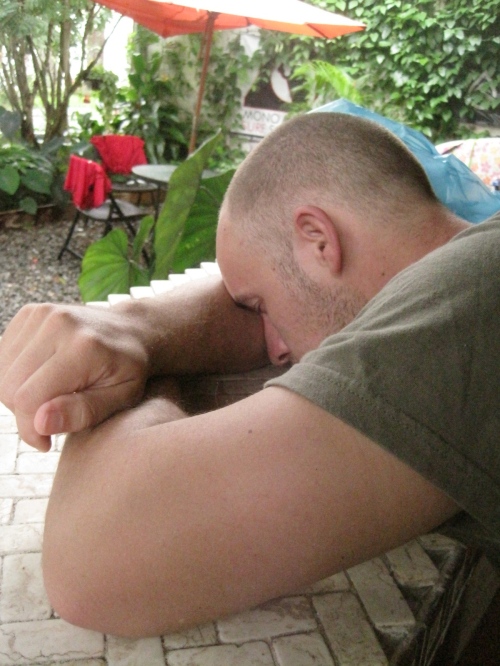 Today was our last full day in Bocas del Toro, and after doing that thing I said we’re not going to talk about and taking a nice long nap, our friend Halley came by to wake us up. As I mentioned in my last update, Halley is one of the reasons we came to Bocas del Toro. We met working on the boats up in Maine this past summer and got along well. When I heard he’d scored a gig in Bocas for the winter, I found it a convenient excuse to start working Panama into our travel plans. 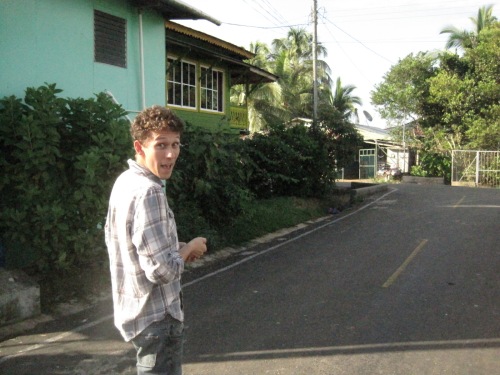 Halley, who shaves with Kleenex.

We all went out for a last walk around Bocas Town before deciding to eat a picnic lunch back at the casita we’ve been renting. Empanadas, bananas, and Johnny Cakes. Johnny Cakes, for those of you who’ve never been to this part of the world, are solid-on-the-outside/flaky-on-the-inside breads made by local Indians using coconut milk. They are cooked in earthen ovens that are piled high with stones to keep the heat in. They are, therefore, impossible to duplicate. They are light, sweet, and delicious. Particularly when you follow the example of the local kids and cover your coconut bread with sweetened condensed milk.

Halley informed us that he’s taking off from Bocas soon and will be wandering for a while around Central America, perhaps even joining us in Nicaragua in a few weeks. So when we said goodbye to him, we added “See you in Nicaragua” on the end of it. This is one of the great things about travel. You get to say things like that.

Tomorrow, Corrinne and I will take a morning tour and then head back to David to relax for a spell before continuing on to the Chiriqui highlands. This is pretty much farewell to Bocas del Toro and I have a strange feeling about that. Some places you leave and you are certain you’ll see them again. No matter how remote, you’ll find a way. I haven’t felt that way about Bocas. I like it for many reasons. The children playing freely in the streets in a way you no longer see in America. The beautiful skies. The little barcas that carry everyone between the islands for a dollar or more, depending on which island.

I like it a lot more than when we first got here, thanks to the New Year’s crowd fizzling out. But I don’t know that I’ll ever come back here again. I don’t know that I won’t, either. It’s just one of those fuzzy points on the map that I may or may not come across again.

Years ago, I read a poem by Jorge Luis Borges in which he talks about how somewhere there is a street he will never walk down again, a house he will never see again. How, as he gets older, he increases the number of places he has seen for the final time without knowing it.

It’s strange to know I’m leaving a place tomorrow with no idea if I’ll ever see it again. I know there are many of those places in the world for me right now, but for some reason I’m more aware of it this time. Maybe it’s because I’ve felt so awake the past few days in a way I haven’t felt in a long time. Maybe it’s because I’m getting a little older and am thinking about these things for the first time.

If it is the last time, I’ll miss it, and I’ll remember it better than most. What I said about Bocas applies to Panama City, as well. But Bocas has another thing going for it that I can’t forget about.

It’s the place where I learned to surf.

On Becoming an Uncle (and a Better...