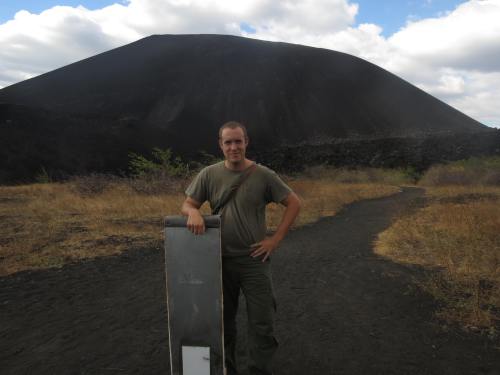 As proof that human beings will try anything, I submit for your edification the new phenomenon of volcano boarding. This has already been covered by everyone from CNN to the BBC to Lonely Planet as one of the most unique ways to get a thrill on the planet, and if you’ve never heard of it, it’s pretty much exactly what you think it is.

Here’s how it works: You take a one hour ride along bumpy volcanic roads to Cerro Negro Park. Cerro Negro (seen behind me in the above photo) is the youngest volcano in Nicaragua. How young? 1850. That’s how young. It’s a mere 163 years old and, as if to prove it belongs, it has erupted nearly thirty times since it emerged on the scene. And eruption in 1972 covered nearby Leon with a thick layer of ash. The last eruption was in 2004, and it remains highly active. Another eruption could happen any time now.

Once you arrive at the park, it’s a one hour hike up the volcano. You’re given goggles, an orange jumpsuit in a bag, and a toboggan with a formica bottom that will be your ticket to Thrill City. The hike is pretty tiring, and I actually ended up carrying two boards in addition to my own for people who got winded on the way up. Near the top, we circled the smoking cone of the volcano, which belched up just enough gas to let us know our sledding was being done on borrowed time.

That was one of the most thrilling things about doing this. It’s a hell of a thrill to slide down a volcano, but it’s also something that could end tomorrow, or whenever Cerro Negro decides to erupt again. Once it blows, that will probably be the end of volcano boarding, at least for a few years.

From the top of the volcano, the views are stunning. If you got to one side of the top ridge and put your hand down, you have to immediately pull it away. The ground is just radiating heat. Off in the distance are broad plains with smoking craters right int he middle like the planet’s own subway vents. To the west, several volcanoes, including Momotombo, rise out of the landscape, framed by the Pacific ocean. The sun was setting when I was up there, putting the whole scene in a sepia dream. I could have sat up there for hours. But, of course, there was sledding to be done.

I was the first volunteer. I put on my jumpsuit and goggles. Instructions were given on how to maintain a straight line, how not to crash, and what to do if you wipe out. Then I lined up, Sat back on the board, and took off down the slope. 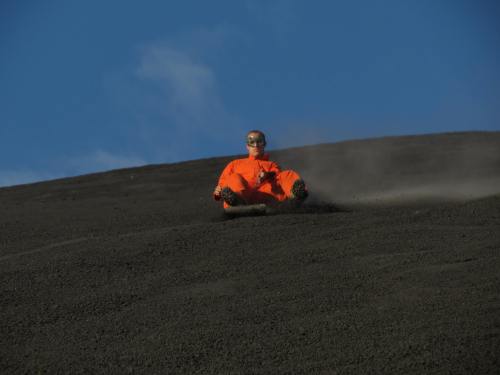 Yes I wiped out. The bottom section is particularly rocky and, after consistently correcting because I couldn’t maintain a straight line, I finally just leaned back and let the thing fly. My top speed was clocked at around 32 mph, which was nothing compared with the top speed of 56 mph. Right around the time I hit my top speed, with gravel flying all around, I lost control and bailed out into the side of the volcano, scratched up my forearm, and came up laughing. Then I finished my ride.

At the bottom, I was given a cookie and a beer while I ripped off the jumpsuit and dumped five pounds of lava rock from my boots, then spent the next thirty minutes watching everyone else come down as a the sun set in the distance. 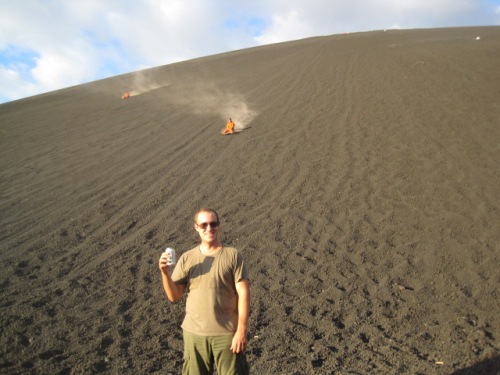 This was one of the best experiences I’ve had on my trip. Beautiful, difficult, thrilling, exhausting. I came back to the hostel with endorphins blasting out of my brain. I danced in the shower. I fell asleep laughing. I woke up the next day spent and smiling.

You get the picture.

Any more words and I’ll run the feeling down. But days later, I’m still buzzing. This one is going to be tough to top.

The Road to Steamboat Springs