Dining Out in New Orleans: Tan Dinh (with Robin Rapuzzi) 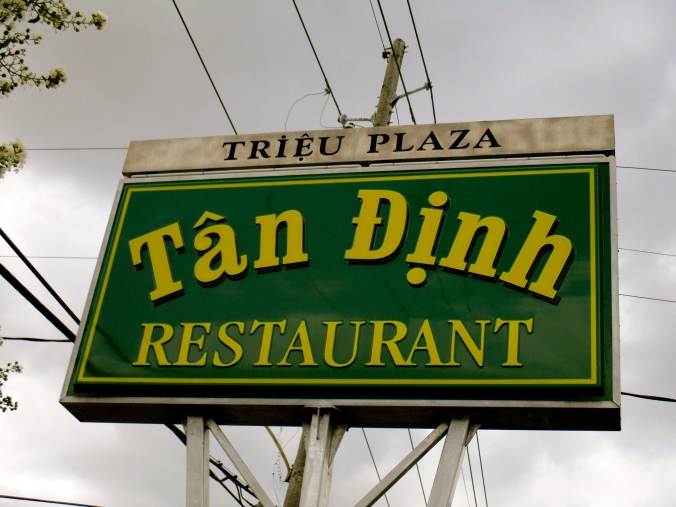 Crossing the Mississippi for the first time in this series, I hauled percussionist “Washboard” Robin Rapuzzi over to Gretna to sample the West Bank Vietnamese staple Tan Dinh. Let the massive portions commence… 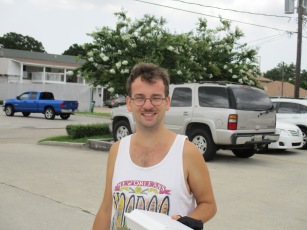 For reasons obvious and subtle, the cuisine of New Orleans is bound tightly to the cuisine of France. Creole cuisine, in particular, follows the French haute style of rich, blood thickening sauces and insane attention to detail. The French brought their food traditions with them, and God bless them for it. God knows what Louisiana cooking would look like if the English ever planted a flag here. Probably something like this…

No. Thanks, England. We’re good.

So we here in Louisiana owe the French a strong debt of gratitude for kick-starting our culinary traditions. And while the cuisine of New Orleans and the rest of the state has become something of its own since then, there is no question that the French got those traditions started. And like much of the culinary world, the traditions here have always developed with one eye looking over at France.

For the Vietnamese, it’s another story.

There can be no doubt that the culinary traditions of Vietnam picked up some influence from the country that took over their government for the better part of a century. The most obvious influences being the introduction of the baguette, which leads to the Vietnamese Banh Mi sandwich, and coffee, a beloved part of Vietnamese daily life.

But unlike the cuisine of Louisiana, Vietnamese cuisine never depended on its colonizers to develop. The Vietnamese were doing just fine putting together a wide array of tasty meals with little or no help from the French, thank you very much. From inexpensive provincial cuisine enjoyed by the masses to delicately assembled dishes designed daily for a series of imperial families, the cuisine of Vietnam has become recognized worldwide for its intricacy and balance, which harkens back to traditional beliefs in elemental influence. Sweet and sour, salty and bitter are balanced in much the same way as air and water, fire and earth. It’s like the molecular constructions new chefs are looking to today, only its thousands of years old. 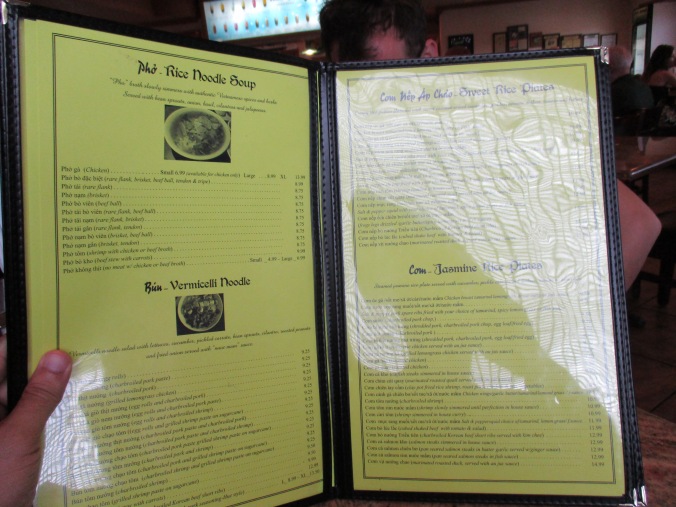 And it makes for impressively large menus.

I wrote briefly about the Vietnamese community in an earlier post, but one parallel I’d like to draw between Louisiana cuisine and the cuisine of Vietnam is the wide availability of fresh, tasty ingredients. Both communities are blessed with a great climate and lots of access to the bounty of the sea. The restaurant scene in New Orleans (much like the restaurant scene in France) is dominated by local dishes and local flavors, from the high class Creole cuisine of the old Quarter restaurants to the soul food joints that dot every neighborhood from Lakeview to the Lower Nine. But if you ask any resident what cuisine they fall back on when they depart from the local fare, it’s safe to assume that the answer, more often than not, will be Vietnamese.

Once you make that choice, there are a wide range of options, and increasingly more options within the city limits. For years, if you wanted food Vietnamese food in New Orleans, people would tell you to hop in your car and head to either Versailles (the large Vietnamese community in New Orleans East) or across the river to the towns of the West Bank. And there are still those who will tell you that if you want the real stuff, and not some newfangled “fusion” of a cuisine that needs no improvement, this is still where you need to go.

Among the old school Vietnamese joints, Tan Dinh is about as good as it gets. Located in a strip mall on Lafayette Street, just off the Westbank Expressway, this spot has been serving up a ridiculously large array of Vietnamese classics for over two decades. Robin and I hit the place on the tail end of the lunch rush and were seated next to gigantic painting of Halong Bay. We ordered up two Vietnamese coffees, which are slow-drip French coffees coffees with sweetened condensed milk. They bring the cup with the syrupy goodness on the bottom and the percolator settled on the top. You sit there and wait for all the liquid to drain into the cup, then stir everything together and pour it over a glass of ice. It’s delicious.

And if you’re impatient waiting for that coffee to do its thing, you can order up an appetizer. On the recommendation of our waiter, Trung, we went for the spicy lemongrass chicken wings. 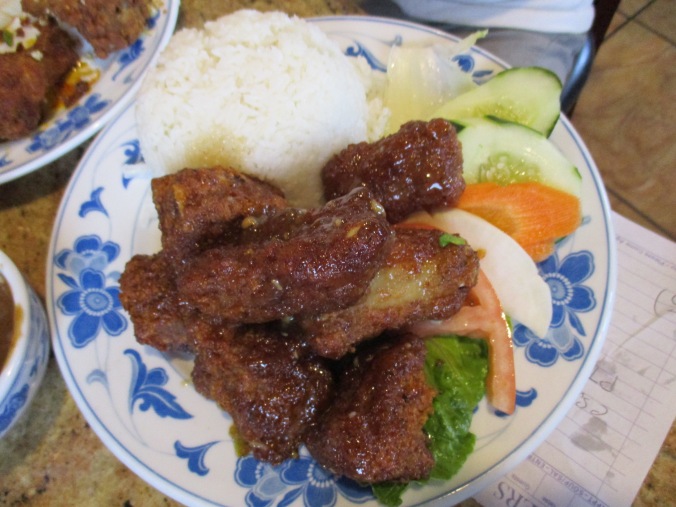 Great appetizers and coffee are a fine start to things, but I came to this place for one reason above all. I came for the pho.

For the uninitiated, pho is about as perfect a bowl of soup as has been invented by man. A rich, flavorful broth is poured over rice noodles, vegetables, and your choice of meats. Bean sprouts, mint leaves, sliced jalepeno and chili sauce are often included on the side for the customer to add as they see fit. The result is world class comfort food that also happens to be pretty damn good for you. 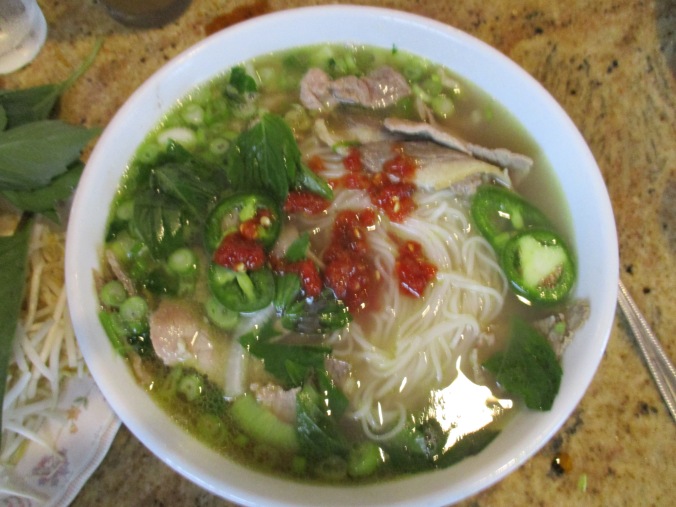 Note the chili sauce in the center. You need this.

I went with beef flank and brisket as my meat options and got to work. I add plenty of pepper and chili sauce to mine because I like to be a disgusting sweaty mess by the time I finish my pho. It’s a sign of character.

As you might imagine, this is not the easiest food in the world to eat. The best way to attack it is with a spoon in one hand and chopsticks in the other. Scoop up a bunch of noodles with the spoon, spear them with the sticks before they slither off, slurp up the noodles, then follow up with the spoon so you get a nice helping of broth and veggies to round things out. And when all the meat and noodles are gone, you still have a nice healthy bowl of rich peppery broth, guaranteed to keep your sinuses in tip-top condition for a week.

I know I haven’t written a lot about my dining partner in this post, but that’s only because the food was so good I forgot he was there. Robin’s a pretty quiet guy when he’s eating. In fact, he’s a pretty quiet guy almost all the time that he’s not on stage. When he is on stage (or playing the street), however, he makes quite a racket (see here). Robin plays in a number of bands around town, but he’s best known for his washboard antics with the legendary New Orleans street band Tuba Skinny, who have released four albums and toured across Europe, Australia, and Mexico. (They even have a Wikipedia page, which is the true mark of artistic success in today’s society.)

Robin had to call uncle before finishing his plate of barbecued pork ribs (Vietnamese style, of course), which I understood, as he is not a large man. We packed up the rest and assured our waiter we would be back soon, then held the door for the next group of people coming in. Tan Dinh is a popular spot, and just because the lunch rush is over doesn’t mean things slow down. 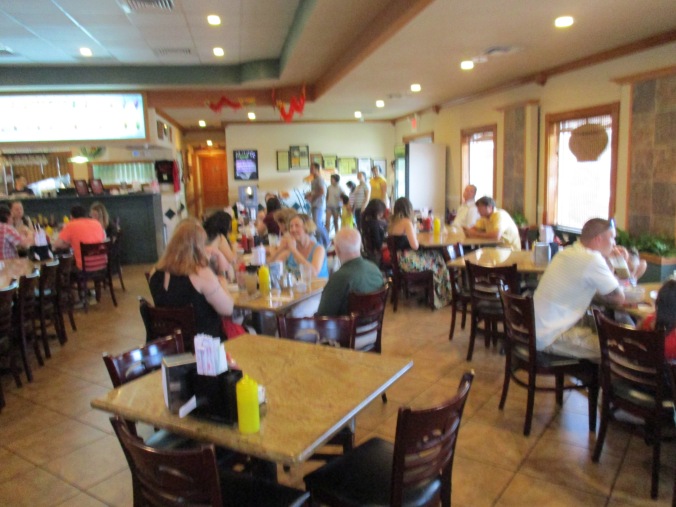 Tan Dinh is located at 1705 Lafayette Street in Gretna, just off the West Bank Expressway. More information can be found here.

The family that owns Tan Dinh has recently opened a new restaurant on Maple Street in Carrollton called Ba Chi Canteen. They can be found here and here.

Tuba Skinny’s new album, Owl Call Blues, was named Best Traditional Jazz Album by Offbeat Magazine. You can order it here. You can find more about the band on their Facebook page here.

Dining Out in New Orleans: Taylor Made Wings on the Geaux (with Zach Mohr)

Layover at Home: An Unexpected 24 Hours in New Orleans

What’s Left of the Past: The Phillippi...

Tacos and Churros in Mexico City

Dining Out in New Orleans: Satsuma (with...