They hook you in with the music. There you are in the terminal, like you’ve been for a hundred flights before, and the ticket agent comes on the speaker to tell you that your flight with Hawaiian Airlines is now boarding. You shuffle up to the door, and they’re playing Hawaiian music. Steel guitar. Ukelele. Voices that float to you like a breeze kissing your face. The setup sounds kitschy as hell. Maybe it is. But I started bouncing up and down like a kid when I heard that music.

I arranged most of this trip for the Big Island, so referred to because the actual name of the island is Hawaii, which is also the name of the state, which confuses the hell out of most people. Kinda like how we call Mahi Mahi by its Hawaiian name instead of its English name: Dolphin fish. It’s not dolphin, of course, because that would make everyone who eats it a gigantic douchebag. It’s a fish called dolphin fish, but you can’t put that on the menu or children start crying. So Mahi Mahi it is. And Big Island.

I was due to fly into Hilo (on the aforementioned Big Island), but first up, I had a four hour layover in Honolulu. This was by design. I like to arrange long layovers in interesting places when I travel, and that’s not too hard to work out on international flights. A long layover is how I first saw Amsterdam, and I could easily write a post about my last 15 hour layover in Mexico City. Long layovers aren’t quite as easy to pull off on domestic (read: U.S.) flights, but with the size of travel distances here, you can often find a way to work something out.

Hawaii’s a strange one, though. It’s one of the most isolated parts of the world (in regards to its distance from other land masses), but it’s still part of the United States. So flying there, as an American, is a domestic trip. But it sure doesn’t feel like it.

Also, Honolulu is a pretty big town with a lot of new construction, and it can be hard to negotiate for a newcomer. Ideally, you want a guide, the right guy in the right place who can help you make the most of your time.

I met Tui Scanlan  at the National Poetry Slam in 2010. We hit it off pretty quick, and I’ve been threatening him with my presence in his beloved island chain ever since. Having finally made good on that threat, I called him from the airport and asked where I should meet him.

This is the first mistake you can make in Honolulu. I’m not quite certain about the public transportation yet, but taxis are both in high demand (long lines of families waiting for their turn at the airport) and expensive. I think the going rate is about eight hundred dollars a mile. And your watch.

I’m not a miser, but there’s nothing more depressing when you’re on a budget than sitting in the back of a cab in an unfamiliar town, helplessly watching the numbers climb higher and higher, and also closer to the total amount of cash you have on your person. The last thing I wanted to do my first day in a brand new state was ask my cab driver to stop at an ATM so I could pay him. But that meter got to some crooked numbers in a hurry. I wasn’t being cheated, you understand. Things are just more expensive here. Most goods are imported (as in, shipped across an entire ocean), and gas is no exception (neither are cars, for that matter). The guy who drove me couldn’t have been nicer, but that was easily the shortest 40 dollar cab ride in history.

Fortunately, I had a gigantic Hawaiian there to greet me and take me out to lunch.

“What do you want?” asked Tui.

I asked what was good, and was informed that since everyone in the world moved to Hawaii, you could find a good version of just about anything.

Ramen with egg, seaweed, bok choy and pork. If you don’t like this I worry about you.

In America, ramen noodles get a bad rep. They have become known as college-student food, because most college students don’t know how to cook anything. Instant ramen noodles are cheap, pre-packaged, and filling, and as long as you can boil water you can make them. Very helpful when you’re racking up 100,000 dollars in student loan debt.

But in Japan, ramen is an art form. The excellent PBS series The Mind of a Chef dedicated their first episode entirely to noodles, specifically to ramen. When done well, the ramen noodles come in a rich, hearty, impossibly flavorful broth with a lot of tasty add-ins like pork, shrimp, various veggies, egg, and so on. It’s a terrific dish when it’s done well. 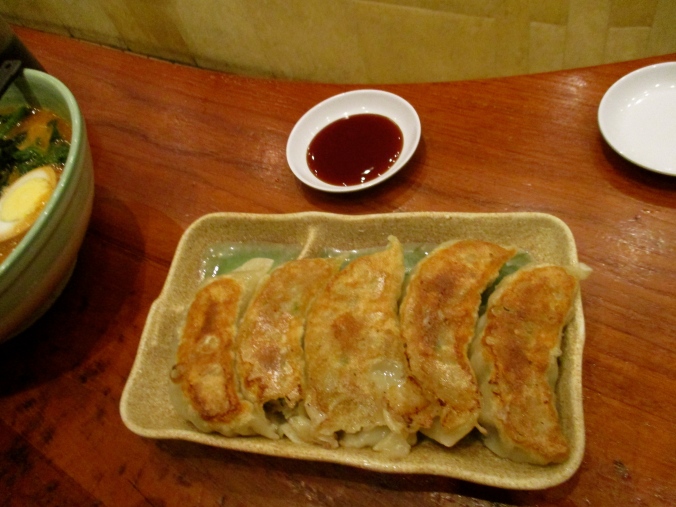 Gyoza as a starter, because Tui and I are men of large appetites.

The Goma Tei location we went to is located inside of a fairly benign looking shopping center.  If they had food this good in every mall, I might not hate being within five miles of malls. The restaurant is a long wooden bar that wraps around two thirds of the space (which isn’t large), with a few tables on the side and the kitchen in the back. It’s neat and tidy, but it certainly doesn’t give the impression of what’s to come. I let Tui order the ramen of choice, along with some gyoza (pan-fried dumplings stuffed with pork) and a couple Kirin lagers (on tap). When the food comes out, you realize what a serious operation it is. Our gyoza fell apart as we ate them (they were still delicious), which I put down to our own clumsiness. The chef must have seen this however, because we were promptly sent a new order of gyoza, which the waitress told us the chef wanted us to have, free of charge, because they were “more beautiful.”

This was easily the best ramen I’ve ever had. The flavor just pops out of the broth, and the noodles were perfect consistency.  We pounded down our meals, then I went across the street to grab a bathing suit.

Sounds stupid. Actually works. This is how I got my bathing suit (or “board shorts” in Hawaii, which is actually a much better term).

There’s a beach right behind the noodle shop (because Honolulu) and we aimed for that one. Ala Moana Beach Park is kind of a local spot, but it’s still a primo location for wedding shoots. I saw one such shoot while I was swimming. One of the photos everyone goes for is leaping into the air, with the photographer timing it just right so that the happy couple has their feet high off the ground when the shot is snapped. I’ve never really understood that shot, but apparently it’s in high demand.

Tui informed me a of a popular local pastime of attempting to photobomb these shots by leaping into the background at the exact moment the shutter clicks, so that the happy couple—feet off the ground and smiling—will forever have a grinning, leaping Hawaiian in the background of their perfectly timed wedding photo.

I’m not a fan of cold water. My sister once got into a bathtub filled with ice because she’s a mutant, but anything below hot bathwater turns me into a shriveling mess. So Hawaii is just my speed. The Pacific is warm and pleasant here, and so calm most of the summer that you can forget that if you get swept out to sea you will never be heard from again.

There are plenty of beaches in Hawaii where that’s a real concern, but Ala Moana isn’t one of them. It’s about as laid back and pleasant a spot as you can imagine. Unfortunately, I didn’t get to float around for twelve hours (I would have, I really would have) because I had a flight to catch.

I didn’t have a towel, but that didn’t matter, because I’m in Hawaii, and because I was flying Hawaiian Airlines. When I showed up at the security checkpoint in my bathing suit and t-shirt and sandals and wet hair, the TSA agent just smirked. This was the first flight I’ve ever done in my bathing suit.

And they had the music playing for that flight, too.

Goma Tei is located in the Ward Centers at 1200 Ala Moana Boulevard. They have a website here.

On the Trail of Jack London—Oakland, California

Hilo and the Angry Sea