Hilo and the Angry Sea

Scene on the Wailiku River near Hilo in 1947, one year after a tsunami devastated the town. (photo: Roger Coryell)

Hilo Bay is calm in the evening. Even with the remnants of a tropical storm dumping buckets of rain on the town, the waves barely register. It’s nothing but glass, pocked by rain. The bay sits to the left of the taxi. I ask the driver if he grew up in Hilo. He nods and points to the right.

“We used to live right there,” he says.

The area he points to has a sign that reads, “Site of Shinmachi.” There was a town there once, a town within the town. A small Japanese community that,  along with much of Hilo’s waterfront and the railroad that ran along it, was wiped out on April 1, 1946 by a tsunami. 159 people were killed.

Fourteen years later, an earthquake off the coast of Chile sent waves rocketing across the Pacific at a rate of 500 miles an hour. By this time, Hawaii had set up the Seismic Sea Wave Warning System, and warnings were issued across the islands about the impending tsunami. But hour after hour ticked by, with no disaster in sight. Twelve hours after the warnings, people began to believe it was a false alarm and moved back into the area near the bay. The tsunami finally reached Hilo a full fifteen hours after the quake. Shinmachi, which had been rebuilt after the first tsunami, was destroyed again. 61 residents of the town were killed. 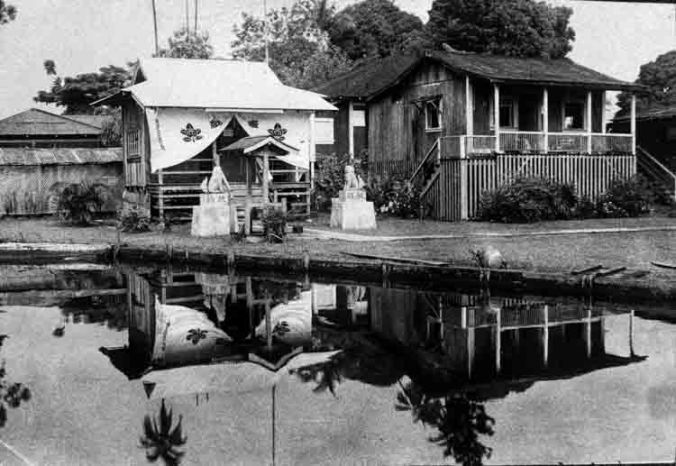 House and shrine in Shinmachi, prior to the tsumanis. (photo: Pacific Tsunami Museum)

In the cab, the driver tells me about the tsunami in 1960, how it covered the house he and his family lived in. “Then we moved up the hill,” he says.

He says it casually, the same way I’ve heard people in New Orleans talk about their lives in the last decade. They lived somewhere. The world ended. They went on.

Like much of the waterfront around Hilo Bay, the area where Shinmachi stood is now a park (Wailoa River State Park). It’s a very beautiful place. Emerald green grass, tall trees, bridges, the quiet end of the Wailoa River where people casually fish in the neverending Hilo rain. There’s a statue of King Kamehameha, the ruler who unified the islands, fronting the park. And in the middle of the park, if you walk around and look for it, a memorial to the people who lost their lives in the tsunamis, and to the small Japanese community that once stood there. 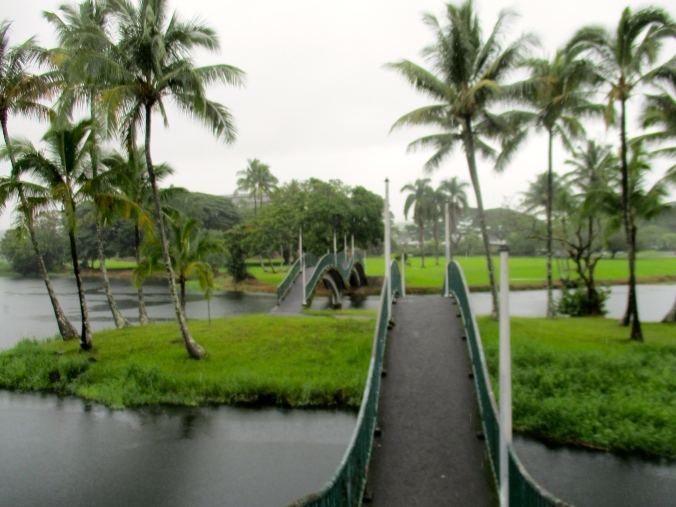 Shinmachi was one of many Japanese communities that dotted the islands in those days. The first Japanese came across as laborers for the sugarcane fields that provided so much of the islands’ income. The first wave of Kanyaku Imin, government sponsored contract laborers, arrived in 1885. More quickly followed, and by the early 1920’s, nearly half of Hawaii’s population was of Japanese descent. This number shrank when the United States instituted the Immigration Act of 1924, which forbade all Japanese (and virtually all Asians) from emigrating to American shores. But the influence was there. It’s still there.

, which were also inundated by the two tsunamis. Originally dedicated by Hawaii’s last monarch, the gardens are a tribute to the first generation Japanese Americans (Issei) who endured backbreaking labor in the sugarcane fields to open the door for their descendants, and future immigrants.

The gardens sit in the center of an arc of road called Banyan Drive, named for the wide spreading trees whose roots descend from their branches. The banyans were here for the tsunamis. They survived.

Banyan tree in Lili’uokolani Gardens. The root system descends from the branches. For scale, note the family at the bottom right.

A few blocks from these parks sits the Pacific Tsunami Museum, a small museum dedicated to a deeper understanding of these disasters, and to the history of the town of Hilo. Any port city has a special relationship with the waters that surround it, and Hilo is no exception. This is a town that sits between the devil and the deep blue sea, with the Mauna Loa volcano ever threatening at one end (a lava flow in 1881 came close to destroying the city) and the power of an entire ocean sitting at the other.

The Pacific Tsunami Museum sits inside of an old bank vault, and covers Hilo’s history as a whaling town, a sugar cane shipping center, and the second largest port in Hawaii. There are plenty of pictures of the city in its early days, and the results of the devastating waves that demolished its downtown and forced the whole city farther up the mountainside. There are stories of heroics, of lives lost, and of what is being done to help other communities learn from the losses of the past. 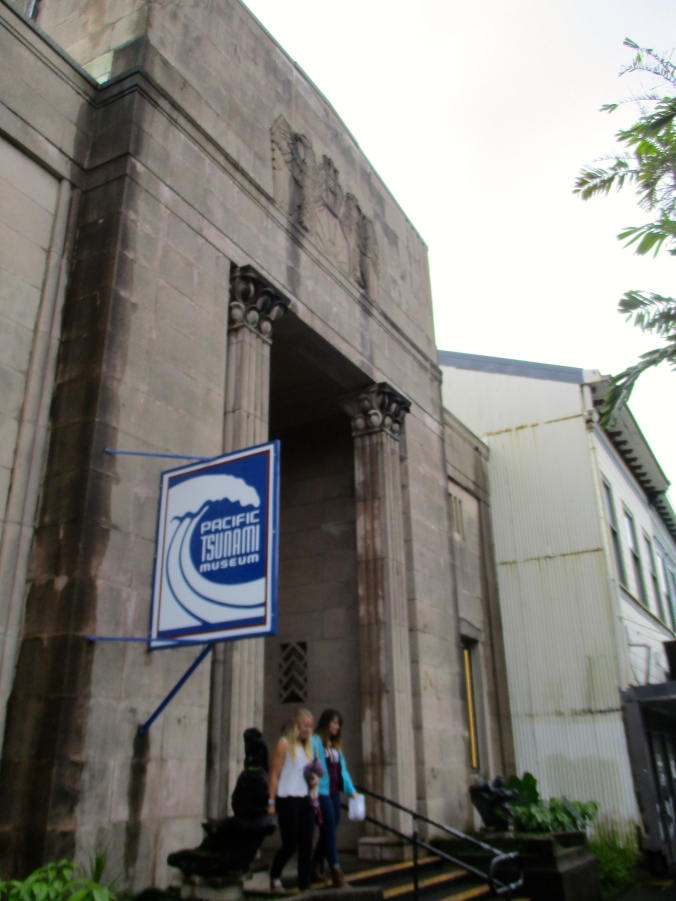 A sense of loss isn’t palpable in Hilo. Maybe because it’s been over 50 years since the last tsunami. It could simply be that the community has learned how to adapt to its position on the edge of a razor.

If you go out to Coconut Island, a quiet little spot on the edge of the Lili’uokolani Gardens (cross the bridge to get there), you can get a view of the city of Hilo, sloping down from the mountain towards the peaceful bay in front of it. There are fishermen out there pretty much every day, and tide pools, where the business of making life goes on unabated. I sat under a shelter out there for nearly an hour. A tropical storm had been threatening the coast on my arrival, but had broken up before it could do much damage. The rain was coming down hard. I sank to my ankles in water in both parks as I walked through the grass. For a while, as I sat there, Hilo was completely obscured by rain. I couldn’t make out a single building. Then the rain eased, the city became visible again, and I started to walk back.

The rain falls. The sea makes threats. Hilo goes on.

The Pacific Tsunami Museum is located at 130 Kamehameha Avenue. Admission is eight dollars. They have a website here.

The Queen Lili’uokolani Gardens are located at 123 N. Kuakini Street.

Wailoa River State Park is off Mamalahoa Highway, which becomes Kamehameha Avenue. The statue of King Kamehameha faces the waterfront, and should be visible from the road. There is a sign that reads “Site of Shinmachi” close to the highway. The Shinmachi Memorial is in the center of the park, and looks from a distance like a large stone circle.

Hilo and the Angry Sea was last modified: December 30th, 2016 by Nick Fox