Hitching on the Kona Coast

It’s not as easy as driving. But if you don’t want to spend your vacation dough on a car, hitchhiking is still widely practiced on the Big Island.

Let me preface this by saying that there is a public transportation system on the Big Island. It’s called the Hele-On Bus. Each ride costs two dollars, which is particularly reasonable since that includes rides from one coast to the other (try and find a three and a half hour bus ride for two dollars anywhere else in the States). The drivers are friendly, the views are often terrific, and they make for perfectly acceptable travel.

The problem is, they only run so often, and they have a limited range (there are several busses that only run to certain sections of the island once a day). I’m not trying to knock the system. I’m a big fan of public transit, as long as it’s not in Rhode Island, whose system (RIPTA) is my personal benchmark for shitty busses the world over. If you don’t believe me on that score, you have two options.

Either 1) Go to Rhode Island and take a few busses (especially the line to Newport. Jesus…)

or 2) Spend the remainder of your days living a life of sin and degradation, and when you die, if the more pious among us have their facts straight, you will be confined to Hell. RIPTA will be their public transit system.

The Hele-On Bus is just fine for getting around the island if it happens to coincide with your schedule. But sometimes, you want to get places the bus isn’t going. My last post was about hiking in the Waipi’o Valley, and there’s no bus there from the nearest town (Honoka’a). So if you don’t want to walk eight miles, you better stick out your thumb.

I also want to mention the obvious: hitchhiking is very different for men than it is for women. In general, men can be less choosy about who they ride with. Women tend to get picked up much quicker than men do, but there are all kinds of hazards associated with this that I have never had to contend with. The most I can say on that front is that I have seen women hitchhiking solo and in pairs on the Big Island. Take that for whatever it’s worth.

As a general rule, I hitchhike when it’s the best possible option for getting between two points. For example, when I was on the coast of Maine a few years ago and wanted to get to Vermont, my only option other than hitching was to take a bus to Boston, then another bus back up to Vermont. Whereas if I stuck my thumb out, I could travel straight across.

A few days ago, I was waiting for a bus in Honoka’a, which would take me to the Kona coast. The bus never showed. So, rather than wait another four hours for the next bus, I went to the highway and stuck out my thumb. Five hours later, I was at the Manago Hotel, sipping coffee and eating the best damn pork chop on the island.

But here’s the deal. I could have been there a lot sooner, except I broke one of the cardinal rules of hitchhiking: I got dropped off in the middle of town. In a small town (and I mean really small) this makes no difference. All you have to do is walk to the edge of town and stick your thumb out again. But in a bigger spot like Kailua-Kona, you can really get stuck. Most people aren’t going to pick you up, because they’re not going that far. I had a total of six rides on my trip from Honoka’a to the town Captain Cook. I waited less than five minutes for five of them. For that ride out of Kailua-Kona, I waited over two hours.

If there is one thing I recommend when hitchhiking (other than plenty of water), it’s an umbrella. Preferably a bright, colorful one so you’re more visible. The Big Island is covered in micro-climates, and things can go from searing heat to rainy as hell in a matter of minutes. An umbrella protects you from the sun and the rain, and also has the advantage of making you feel like Gene Kelly. 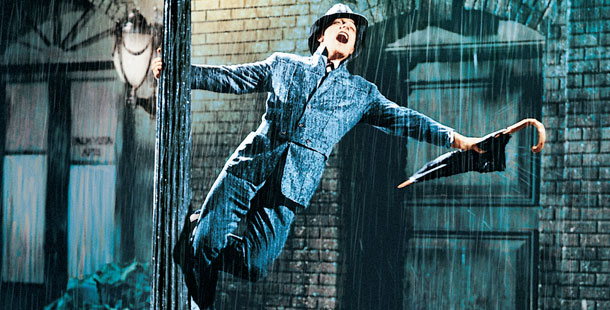 Because why not? (still: Metro-Goldwyn-Mayer)

So wear good shoes in case you have to walk, have some kind of rain gear in case it’s too windy for an umbrella, sunscreen (I can’t emphasize this enough), carry plenty of water, and have a book, so you have something to do while you wait.

I should also mention that I seem to get picked up quicker when I have a book in my hands. Just saying.

2. If you’re going to the backcountry, be prepared to walk out.

I violated this rule a couple days ago, which is why I mention it now. I’d hitchhiked up to Hawi in the morning from Kailua-Kona, a distance of about 50 miles. I got there on three rides, which is pretty damn good for a distance of that size. I hung out in town for  a while (this is recommended, as Hawi is very cool), and then decided that, since I was in the area, I should go visit the birthplace of King Kamehameha I. I ended up stranded in the middle of nowhere with no one to bail me out.

When you’re hitchhiking around an area, it’s easy to assume that every road is going to have a car that will pick you up, especially when you’ve had a run of luck like I’d had that morning. But to get to Kamehameha’s birthplace, I had to walk a mile outside of town, then three miles down a single lane road (I saw two cars total in over an hour), and then two miles down a dirt road on the arid Kohala coast. I did this with no food, half a canteen of water, and bad information. And I did this entirely because I expected there would be someone in the area to give me a ride.

Kamehameha’s birthplace. It’s a better view when you’re not out of water.

The big issue here was that I did not have enough information when I started the hike. The map I had was ten years old, and therefore I didn’t know that the dirt road I was on no longer continued out to the highway, which meant that I was going to have to go back the way I came: two miles of dirt road and three miles of paved, the sun coming down like judgement, and no cars or other human beings in sight.

Road closed sign. It’s a good thing my grandmother wasn’t around to hear what I said when I saw this. She thinks I’m a nice boy.

I caught a break at the end. Just as I hit the paved road, I encountered a man who I asked for water. He didn’t have any, but he gave me a lift back to town. But even with that ride, I walked eight miles in the sun on half a canteen of water and no food on out of date information. A trek that size would have been fine if I was prepared for it. But I screwed up, and was lucky to catch a break at the end.

3. Ride your luck and go with the flow.

The man who gave me a ride out of that situation was a nearly retired officer in the Marine Corps named Edward. Edward gave me a lift to a coffee shop, where I promptly slammed three huge glasses of water and sat for a while to get my body temperature down. Edward was heading up to the Pololu Vally viewpoint, then down through Waimea before heading back to his hotel, north of Kailua-Kona. He asked if I wanted a ride. I wasn’t going to any of the places he mentioned, but I said yes.

Sometimes it pays to be spontaneous, and hitching is one time when it pays to plan for spontaneity. I had a backup plan to stop at a beach if I couldn’t get a ride to Hawi, and if I did get to Hawi quick, I was going to stop at a beach on the way back. My adventure in the wilderness obliterated that. So when Edward came along, I went with a new plan on the fly. It’s generally advisable to stick with anyone who saves you from your own stupidity. 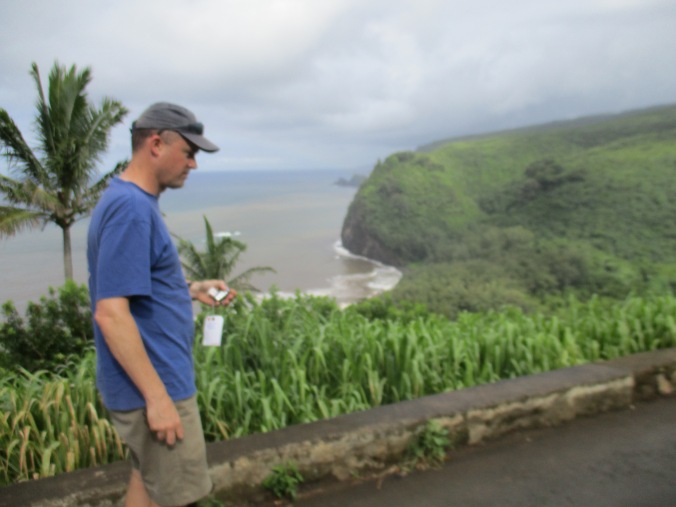 Edward, who saved my dumb ass.

Edward and I rode around for about two hours. He was on a tour of ranches in the area, and I was on a tour of whatever he was on a tour of. If I’d decided to part ways with him back at the coffee shop and start hitching back for my hotel, that would have been fine, but not nearly as much fun as shooting the breeze and getting to see a whole bunch of new country. And as it turned out, I had nothing to worry about. Two minutes after Edward dropped me off, I got a ride from a vacationer all the way back to my hotel.

Sometimes the best plan is to have a little luck.

King Kamehameha absolves me of my foolishness.

Hitching on the Kona Coast was last modified: December 30th, 2016 by Nick Fox