Snaking over 650 miles down California’s coast, the Pacific Coast Highway is both an engineering marvel and one of the most spectacular drives in the country.

It’s a bit easier to get there now, as long as you have the gas money and reasonably good tires, but I do the same thing every time I stand on this coastline. I consider what it’s meant to countless people who crossed the country and got a look at this ocean for the first time. There they were, after thousands of miles of travel, having watched all the terrain swell and dry up and shift behind them, standing on the edge of the continent and looking at the biggest thing in the world.

Whether hanging from a cliffside or skirting the water’s edge, the Pacific Coast Highway is one of the most beautiful drives in America. Its construction feels both inevitable and insane, as it sits at the mercy of coastal winds and erosion, and subject to landslides that can close whole sections of the highway for months.

But man, what a view it provides.

The most famous piece of the highway is the section around Big Sur, and there are plenty of drivers who avoid the highway outside of this area. But the road extends deep into Los Angeles and Orange Counties in the south and as far as Mendocino County in the north, and there is hardly any of it you could write off as not being worth it.

But I’m sad to say I gave up on the northernmost strip early on. Coming down from Eureka weeks ago, I jumped onto Highway 1 right where it begins around Leggett. This stretch takes a long, twisty route that avoids large stretches of the so-called “Lost Coast,” which has avoided development due to its dramatically shifting terrain. But I never made it. The road is so twisted up here that I actually got nauseous, and I’m sure that had nothing at all to do with the gigantic brownie I’d just eaten. In any case, I only got five miles before I turned back, so consider this my incomplete personal narrative of the road in question.

My own journey on the highway begins at Point Reyes, a National Seashore that arcs out into the Pacific and creates a protected lagoon inland. A few small communities have sprouted up here, including the hidden hippie town of Bolinas and the delightful little town of Point Reyes Station where, in typical California coast fashion, you can see work-worn pickup trucks parked side by side with Lotuses and Ferraris.

The drive to the Point Reyes Lighthouse feels like a trip to the edge of the world. The road stretches about 40 miles through marshland and coastal mountain, passing old cattle ranches that have become historic markers as they continue to operate inside the federally protected land. Eventually, on a high promontory so blasted by wind that the trees grow sideways, you come to a little parking area, and after a ten minute walk and a descent of some 400 stairs, you come to the lighthouse, and take in the shifting waters of the Pacific.

That’s the easy way to come into Point Reyes. The hard way is just south of the lighthouse on Limantour Beach, which is the terminus of the American Discovery Trail, a coast-to-coast walking trail stretching some 5,000 miles from Delaware to California. After covering the final 43 mile stretch from the Golden Gate Bridge to Point Reyes, hikers dip their toes in the Pacific, signalling the end of their journey. If you’re aware that even now hikers are finishing this trail after months of walking, then driving through this area can make you feel like a pretty serious wimp.

Further south, Highway 1 skirts around the stunning Muir Woods (named for the naturalist John Muir), where you can see old-growth redwood trees that stand over 200 feet high and date back over 1,000 years. From here, it’s a short drive to the Golden Gate Bridge, and the loveliest spot in San Francisco: The Presidio.

A former military base that housed soldiers from Spain, Mexico and the United States in its 219-year history, the Presidio became part of the National Park Service in 1994. It’s a beautiful stretch of green space capping the San Francisco Peninsula, and offers impossible views from several vantage points. Underside view of the Golden Gate Bridge? Check. Overview of the bridge and the windsurfers and kitesurfers taking advantage of the howling winds underneath it? Check. Expansive view of the Bay emptying out into the Pacific? Check. This is always my first stop in San Francisco, and if I could camp out inside its borders for a month, I would.

Back on the highway, drivers inch their way along the edge of San Francisco and, after screaming their lungs out in traffic through the city and down into Pacifica, eventually come to another quiet little town called Half Moon Bay, home to a massive pumpkin festival and a surfing spot called Maverick’s, one of the most inhospitable, dangerous, and impressive big wave breaks on the planet. If you’re lucky enough to be in the area when the wave breaks (which is not often), you will find the nearby cliffside swarmed with photographers, each hoping to sell their shot of the big wave riders to various surfing mags.

South of Half Moon Bay is where California’s Central Coast begins, and this is where things really start to get interesting. This area, which stretches roughly from the surfing Mecca and hippie-dippie town of Santa Cruz to the plush seaside community of Santa Barbara, makes for some of the most beautiful scenery of the drive, and holds some of its most interesting artistic history.

It was along this stretch of California that Nobel Prize winner John Steinbeck set most of his stories. Steinbeck has long been one of my literary heroes, and my favorite book of his—Cannery Row—takes place among the sardine canneries of Monterey’s waterfront (and if you haven’t read Cannery Row yet, stop reading this and go do so right now—it’s one of the funniest books ever written). The town of Monterey is also home to a long-running jazz festival, the best aquarium in the United States, and a couple of friends of my uncle who put me up for the night, and whose house nearly caught on fire while I stayed with them through no fault of my own.

Carmel-by-the-Sea (actual town name) also has a long artistic history, with writers such as Mary Austin, Sinclair Lewis, George Sterling and Upton Sinclair settling there in the early 20th century. More recently, it’s been known for its long-running Shakespeare festival, its proximity to the legendary Pebble Beach Golf Links, and for being the home of Clint Eastwood, who served as mayor for a time and, it should be noted, could probably still kick my ass.

But as artistic locations go, Big Sur is the one that really stands out.

Let’s start with the coastline. I can’t help but think of Slartibartfast, the planetary designer from the Hitchhiker’s Guide to the Galaxy series, who is particularly proud of his coastlines (especially Norway’s fjords and their “lovely crinkly edges”). As a profound nerd, I am deeply hopeful that Big Sur was one of his projects, as I’m certain he would have won an award for it.

The Big Sur coastline is a work of art, and its beauty has served as inspiration for countless artists. First of all, the engineers who built the highway that connected it to the rest of California, with 33 bridges running along its length. This stretch of highway took 18 years to build, and winds an impossible trail along the cliffs that cascade into the ocean. Highways are pieces of art, too, and this stretch of Highway 1 is close to being a masterpiece. 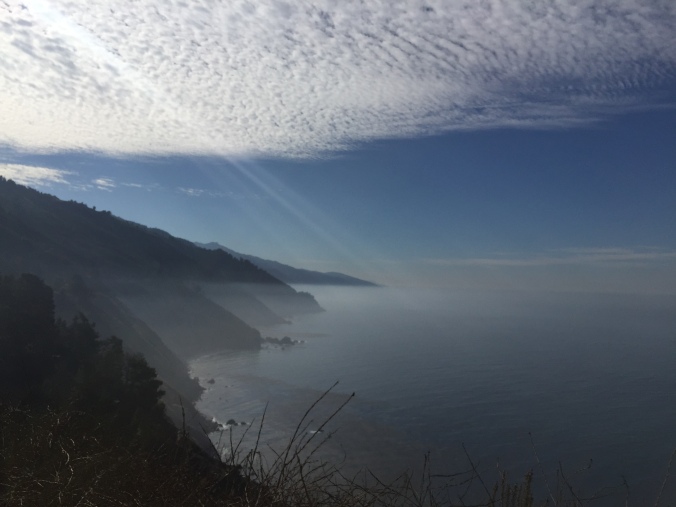 Other artists soon came here. The great poet Lawrence Ferlinghetti kept a cabin here, and a series of visits to the cabin by Jack Kerouac inspired one of his best known works (Big Sur). Hunter S. Thompson, one of my favorite writers, lived on the coast here, a neighbor to the folk singer Joan Baez. Orson Welles and Rita Hayworth purchased property here and built a home they never stayed in, which is now the site of Nepenthe Restaurant. Perhaps the greatest literary stamp on the area came from novelist Henry Miller, who made this his home for 18 years. The Henry Miller Memorial Library sits hidden along the highway, and is one of the area’s cultural hubs.

The road continues its snaking route south until it finally starts to straighten around San Luis Obispo, then broaden at Santa Barbara. The road starts to intertwine with the busier U.S. Highway 101 here, continuing to hug the shore all the way to Malibu. It’s on this stretch that you can feel the divide between Northern California and Southern California most prominently. Gone are the jagged cliffs and high pines of the more rain-swept and mountainous north, replaced by desert landscape and increasingly busy beaches of the south. The dunes start to pile up, and you begin to see surfers on the breaks. You’re level with the coast now, and the parked camper vans and surfmobiles tell you that you’ve moved into a whole different way of living. 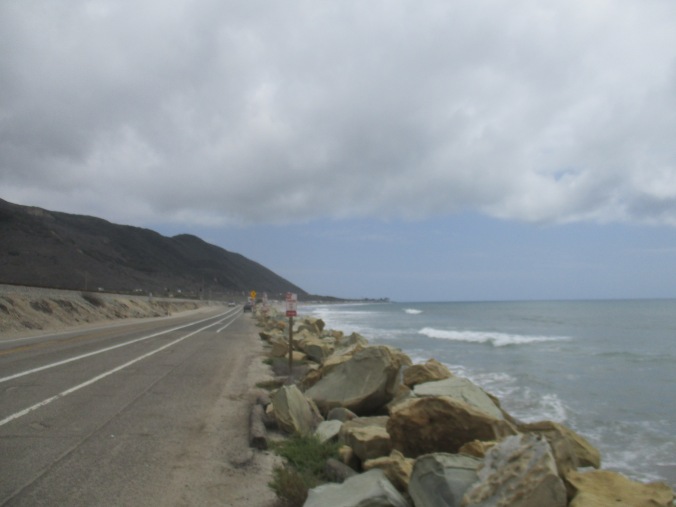 Close to the shore near Malibu.

The highway’s final stretch, from the Malibu Pier to the Santa Monica Pier and down to Dana Point, represents the California most people imagine before they come here. Sunny, sandy, crowded. Cars merging into traffic and pedestrians in bathing suits. Surfboards, rolled down windows. The Hollywood Dream and the surfer’s paradise.

There’s a way you can look at the drive as a journey through California’s various epochs. To the north is the early days. Sparse population, difficult roads, unspoiled coastline. Through the Central Coast, you can see how engineering brought the difficult to reach places within range of the cities, but it still comes largely from mid-twentieth century work. The elements of the information age are there, but large chunks of the coast, partly through inaccessibility, still feel much as they probably did fifty years ago. Then, in the south, the metropolitan sweep of Los Angeles, her gaudy essence extending all the way to the beach. Here is modern California in all its glory. Big and crowded, but still just as much an escape for dreamers as it ever was.

There’s an element of time travel to the Pacific Coast Highway. It brings hundreds of thousands of people annually to remote parts of this coast, but mudslides and construction still close sections for extended periods of time. The land is still rugged, and it is still evolving, and the highway has to make accommodations for that.

FIGHT TOWNS—San Francisco: The Fight That Made Wyatt Earp Famous