Flood Watch: The Bonnet Carre Spillway and the Mississippi River’s Many Tempers 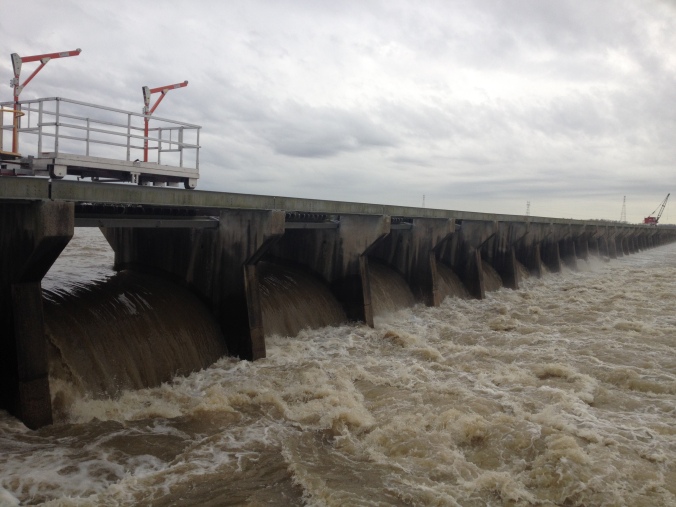 There are many cars pulled up in the parking area when I arrive, everyone coming to see this mile and a half long structure designed to save us all from the wrath of the river. On one side of the spillway, a cargo ship labors upriver, fighting the massive flow going against it. On the other side, water pours through in dozens of cascades, easing the pressure on the rest of the levee system by strategically flooding another part of it. There’s a light rain coming down, and a few members of the Army Corps of Engineers sit under a tent in front of the spillway gates, talking to anyone who wants to know a little bit about what’s going on.

In my neighborhood, the river is high. Higher than any of us have seen it in almost five years. We’re at flood stage in the city of New Orleans, and for the third time in the last nine years the gates of the Bonnet Carre Spillway are open. Water flows through the gates and, with the aid of guide levees, makes its way into Lake Pontchartrain. There are a whole other set of environmental concerns that come with diverting sediment laden river water into the waters of the lake, but those concerns will have to wait. Right now, the city is in danger.

Maybe danger is too strong a word. But there have been massive storms in the central and northern United States this winter, and that water eventually makes its way here. Flood control is a major issue on the Lower Mississippi, and to make sure the city that houses the nation’s second largest port doesn’t get devastated by flooding, the Bonnet Carre Spillway was designed to keep things level.

It was designed because, in 1927, everything went to Hell. 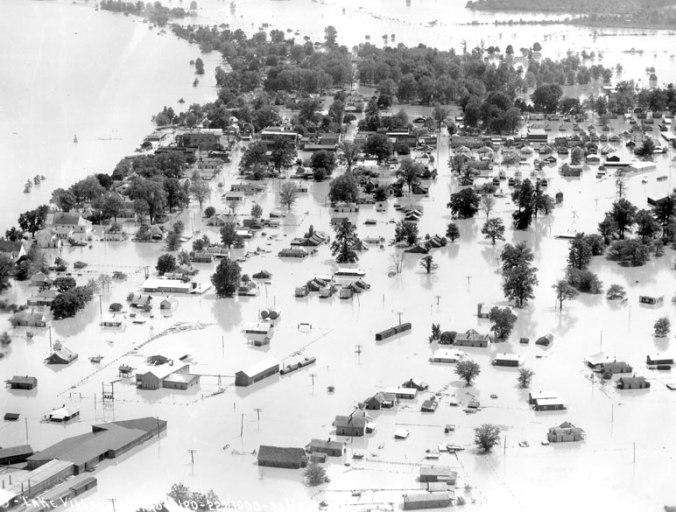 No one had ever seen weather like it before. In 1926, a series of massive storms pelted huge swaths of the country, swelling rivers and flooding cities. Pittsburgh, Cincinnati and Nashville flooded. Dry farmland on the Great Plains flooded. There were flood-related deaths from Virginia to Oklahoma. By early 1927, water from the swollen Missouri, Ohio and Tennessee Rivers poured into the already high Mississippi River. Things were already near their breaking point when the snow from the northern states began to melt, feeding even more water into the river that serves as the main artery of the United States.

And still more rains came. In the spring of 1927, four storms bigger than any in the previous decade hit the Mississippi River in succession. There was nowhere else for the water to go but out, and the resulting cataclysm would change the face of the country.

At Mounds Landing, near Greenville, Mississippi, hundreds of men, nearly all of them black, were forced to work through the night of April 20, held there at gunpoint by white levee guards as the river continued to rise. Over the course of the night men could feel the ground beginning to rumble beneath their feet, and on the morning of April 21, the levee crumbled and gave way. Water smashed through with a force greater than that of Niagara Falls. Hundreds of men were swept to their deaths, and the town of Greenville was nearly wiped off the map.

The breaches continued throughout the spring. In some places, flooding from the river created a body of water more than 70 miles across and over 100 feet deep. An area the size of New England was under water. The floods didn’t recede until that August, four months after the break at Mounds Landing. It was the largest natural disaster in American history, displacing over 600,000 people, and affecting the homes of more than a million. More than 300,000 people had to be rescued by boat from rooftops, trees, and anything else that stayed above the floodline.

And if you ask anyone in this country about it today, few, if any, have ever even heard of it. 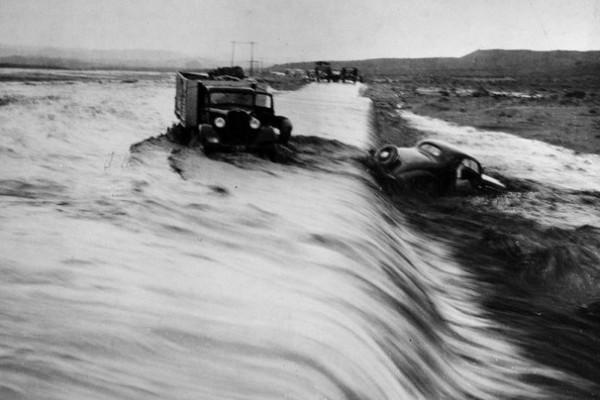 Floodwater pouring through a breach in 1927. (photo: National Archives)

In his book Rising Tide, a masterful recounting of the 1927 Mississippi River Flood, author John M. Barry breaks down the number of ways the flood reshaped the American landscape. First of all, it catapulted the country’s relatively unknown Secretary of Commerce, Herbert Hoover (who had been placed in charge of the relief effort) to the presidency. Secondly, it served as the first wedge between African-American voters and the Republican Party, which had counted on their support since the days of Lincoln. Appalling treatment of black citizens throughout the south was rampant during the disaster, and relief aid intended for them was often diverted to local white landowners. In Greenville, Mississippi, where the most catastrophic flooding occurred, local landowners refused to allow the evacuation of black citizens from pitifully stocked aid camps, fearing that they would never return to work the land they owned.  As evidence of the mistreatment of African Americans in Republican controlled states became more widely seen, many black voters began switching their allegiance to the Democrats, which would help propel Franklin Roosevelt to the presidency and the Democrats to complete control of the congress in 1932.

Third, the disaster reshaped the federal government’s role not only in response to such disasters, but also their role in protecting citizens from future ones. In 1928, the Flood Control Act was passed. It was the largest public appropriations act ever passed in the United States. It allowed the government, and specifically the Army Corps of Engineers, vast authority to monitor, regulate, and maintain flood control on the Mississippi and its various tributaries, from massive rivers like the Ohio and the Missouri, to smaller ones downstream like the Yazoo. It also allowed them to start work on major diversion projects like the Bonnet Carre Spillway and the Morganza Spillway, which have served to prevent massive flooding  in the city of New Orleans.

That last part might sound a bit dull and bureaucratic, and it would be if you didn’t consider the high price that was paid just down the river from New Orleans in the 1927 flood. As the water rose, a group of prominent New Orleans businessmen decided that the best course of action to save the city would be to blow up the levee below them and let the water drain out into the poorer, less populated St. Bernard and Plaquemines Parishes. After making assurances that all those in the path of the flooding would be fairly compensated, the levee was dynamited in Caernarvon, Louisiana, causing widespread destruction of the parishes downriver.

As it turned out, the dynamiting of the levee was completely unnecessary. Breaches upstream were already siphoning water out of the river. As for the people in St. Bernard and Plaquemines Parishes, few were ever compensated for their losses. Those who were compensated received far less than they deserved, and their stories were largely lost to history. 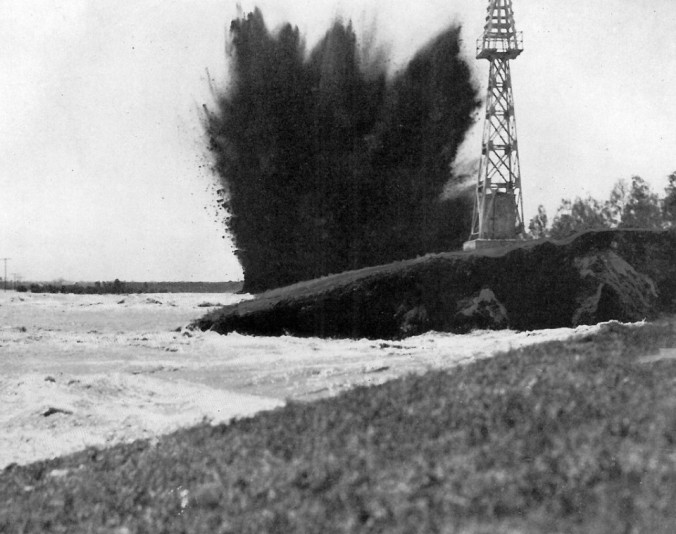 The danger in 2016 is nothing like 1927. The river is high, and flooding presents a challenge, but we’re still far enough away from the time of the great northern snow melts that everyone in New Orleans can remain cautiously optimistic about the coming year.

I moved to the Lower Ninth Ward of New Orleans in the spring of 2011, 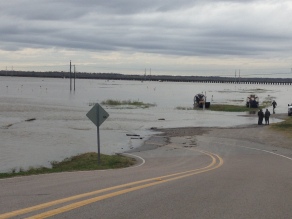 and shortly after my move the river began to rise. When the river reached flood stage in the city, the Bonnet Carre Spillway was opened. We kept hearing the reports from upriver. Flooding in Arkansas. Flooding in Missouri. Water in the streets of Memphis. But it couldn’t happen here, could it?

When the water crested at record flood levels in Vicksburg and Natchez, Mississippi, it became obvious that New Orleans was facing real danger. When the full opening of every gate in the Bonnet Carre Spillway wasn’t enough, the Army Corps of Engineers made the decision to open the Morganza Spillway for the first time in 37 years.

The Morganza Spillway structure was completed in 1954, and its purpose is to divert excess water into the Atchafalaya River Basin. This is a very, very risky proposition. Over the centuries, the Mississippi has steadily been moving in the direction of the Atchafalaya River, which offers a much quicker route to the Gulf of Mexico than the river’s current channel. In short, without the current levee system, the river probably would have moved over the top of the Atchafalaya by now.

Scenario of what could happen with the failure of flood control on the Mississippi. (graphic: Lincoln Institute of Land Policy)

That means that, if the Corps of Engineers miscalculated the amount of water that they spilled through the Morganza, or if the heavy rains overwhelmed it, the entire course of the river could have changed. The Mississippi could have jumped its banks, started flowing down the Atchafalaya, and New Orleans would no longer be sitting on the main branch of the Mississippi River. 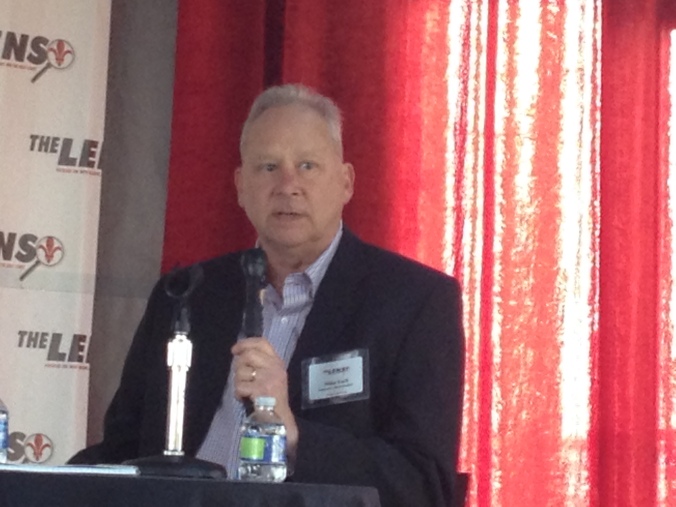 Mike Park, Chief of Operations Division of the Army Corps of Engineers, speaks to a crowd during the 2016 flood event.

The Corps of Engineers opened the first gate of the Morganza on May 18, 2011. For the next couple of weeks, with the river raging at its highest levels in 84 years, the people of New Orleans held their breath. We would either be flooded out, we would lose our river, or we would be just fine. For a few days, the mayor hovered over an evacuation order for the Lower Ninth Ward. I started putting things I owned onto high shelves. I don’t know why. If the river broke through that levee, not much of the house I was in would have been left behind.

In the end, the flood control worked. The city was spared, the river returned to normal levels, and everyone came home, aware that we’d dodged a bullet, and not thinking about the next one. 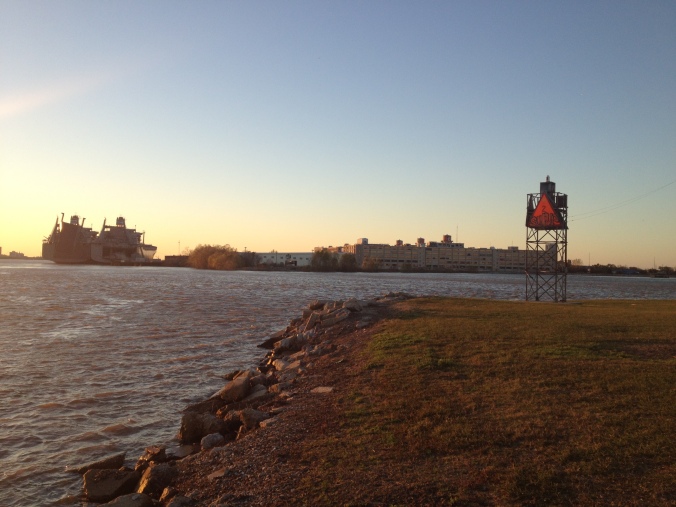 The Mississippi near flood stage in New Orleans on January 12, 2015.

Today, things are calmer. The Bonnet Carre Spillway remains open, but there seems little danger of the water getting any higher before the spring snowmelt hits the Lower Mississippi. For the past three weeks, residents of New Orleans have made their way onto the levees to marvel at the power of this body of water that serves as the city’s lifeline, as well as one of its greatest threats. Like the rest of the world, we are dependent on nature for our livelihood, and like much of the world, we completely forget about this until that livelihood is threatened.

But the river keeps rolling along, indifferent to those needs and desires. It will continue to provide for the city until, perhaps one day, it decides not to. It happened in 1927. It happened in 2011. We depend on engineering to make an accommodation with the river. And when those accommodations are threatened, we hold our breath and wait.

As of January, 2016, the city and the river continue to hold their course. 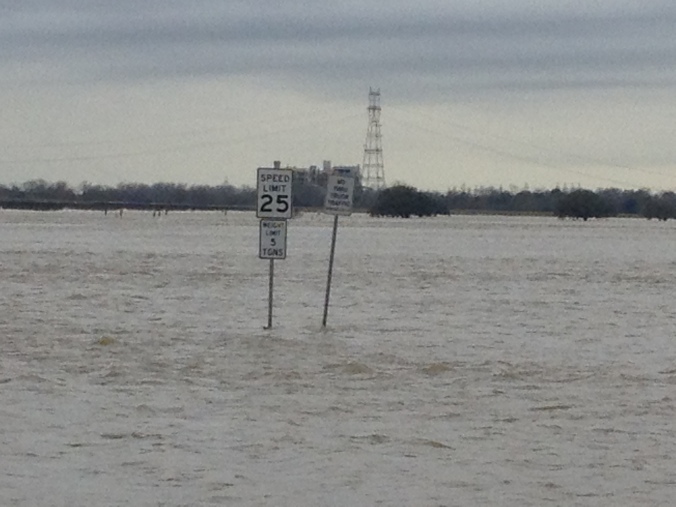 Flood Watch: The Bonnet Carre Spillway and the Mississippi River’s Many Tempers was last modified: December 4th, 2016 by Nick Fox

How to Shave a Catfish: Middendorf’s Restaurant

Interview with the Museum of Americana

The Trip is Dead: Long Live the...